he more accurate the barrel geometry is, the better accuracy shows the rifle with this barrel installed. The seemingly simple meaning of this expression hides centuries-old experience of weapons industry development, tremendous engineering and intellectual efforts, outstanding skills in complicated equipment and tools handling.

The barrel is the most complicated component of the high-accuracy rifled arms to manufacture and quite a number of special equipment is required to produce it. Only high-quality barrel-grade steel is used as a commodity for ORSIS rifles barrels production: 416R stainless steel and 4140 chromium-molybdenum steel.

The high-end technological equipment and advanced technologies allow manufacturing on the base of the factory industrial facilities the barrels in calibers from 5.6 mm to 20 mm with their overall length up to 1050 mm and any twist rate (including progressive), number of grooves (including odd ones), width of lands and grooves ratio and grooves profile (note: progressive means variable twist rate from bigger to the smaller one: from 280 to 254)

All processes of ORSIS barrels manufacturing including deep drilling, reaming and profiling are performed on the base of the factory facilities. The key stage to produce high-accuracy barrels is rifling (profiling) which is executed in the Group of Companies “Promtechnologya" factory by two methods: button-swaging and single-pass cut-rifling. The barrels of all renowned worldwide and extremely accurate rifles were manufactured by one of these technologies.

Single-pass cut-rifling (hook cutter rifling) is the most perfect method to manufacture a barrel out of all recently existing ones. Single-pass rifling is rather frequently called “the champions' technology" as the majority of contemporary world records in sporting were established while shooting by the rifles equipped with the barrels produced using such technology. A special cutting head with a cutter called “hook" processes one groove (single-point) in each pass through the bore. There are from 80 to 100 hook head passes required to complete one groove. The single-pass rifling lathes were designed in the own design department of the factory in cooperation with the European consultants and suppliers of components. “Promtechnologia" LLC experts, being based on the classic English single-pass lathes, re-designing them and developing an original computerized control system, managed to create a new technology. It allows reaching almost practically perfect geometry of a barrel bore: the tolerance of groove depth equals less than 0.0025 mm, twist rate – 0.004 mm per meter. The lands surface finish reaches Rz 0.16 microns, the grooves surface finish - Rz 0.8 microns. The experts admit that the barrels manufactured in accordance with this technology represent a masterpiece of the engineering art and consider them to be one of the best in the world.

In fact, “Promtechnologia" LLC arms factory is one of the few European manufacturers of high-accuracy rifled barrels with single-pass cut-rifling technology by CNC lathes.

Button-swaging represents a method to manufacture rifled barrels by a special tool called “a button" pushed through the bore under pressure with a lubricant applied to reduce friction. The button is a hard-alloy tungsten carbide tool having its hardness value about 75 units by the Rockwell scale. The button body is bigger in diameter than the barrel bore has and, as it moves, it “irons" grooves into the bore surface by metal displacing. Then this operation is followed by a thermal processing of a barrel inside the pit-type digitally-controlled electric furnace which includes stage heating, long exposure and gradual (around 10° per hour) cooling of the barrel. Two tasks are solved simultaneously on this stage of the barrel manufacturing: metal stresses relief and controlled barrel swaging up to the required dimensions. The total time period to complete the thermal processing equals almost two days.

“Promtechnologia" LLC arms factory is the Russian manufacturer of stainless steel barrels by the button-swaging technology. 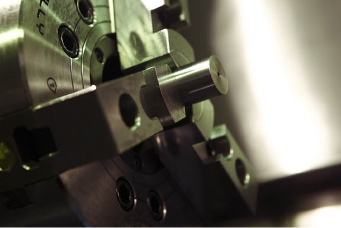 The cartridge chambers are manufactured by the Group of Companies “Promtechnologya" factory experts with the similar attention. This type of operations is executed as by CNC hubs and by universal lathes equipped with the digital control system. To make a precise chamber is almost an art by itself therefore equipment to implement these tasks was redesigned in the factory design department as well. Special devices were installed on both sides of the spindle to adjust the barrel spatial fix by its run-out. Thus, prior to the barrel engagement by the reamer, its run-out is corrected by the special gauges inserted bilaterally in the bore with accuracy not over 0.0025 mm. This allows reaching maximum alignment (axes one-line location) of a cartridge chamber and a barrel bore therefore further increasing of shooting accuracy.

Besides, some special pilot reamers, floating holders and a special lapping system of cartridge chamber and bullet seat are applied for these operations.

The majority of cartridge chambers may be manufactured by C.I.P. or SAAMI standards with short or long bullet seat according to the buyer's request.

The ORSIS barrels might be finished in matte or polished. Besides, the barrel may be fluted per customer request. The flutes represent not only a design feature but offer opportunity to accomplish a number of functional tasks including barrel lightening and its cooling speeding-up. Special equipment is employed to cut the flutes therefore accuracy is not affected adversely.